Savini Jason is one of the variations of Jason Voorhees, and one of the two variants that weren't based upon any of the films; the other being the [[Retro Jason] Savini Jason ] skin.

Savini Jason seems to be designed with more vanity than he can feasibly use in the hands of a casual player. That aside, his primary playstyle seems to border on the "slasher" archetype, in which Jason benefits from attacking and pursuing counselors outright as opposed to grabbing them and diversifying his kills.

Savini's strengths include Shift, allowing him to use it longer, as well as reducing his cooldown, Weapon Strength, which causes his attacks to deal more damage, and Destruction, which enables him to break down doors in a reduced number of hits. Combined with a starting total of five bear traps and two throwing knives (alongside the two available in the shack), as well as a 50% longer weapon reach, Savini has all the tools necessary for a very aggressive and hostile method of playing.

Savini Jason's weaknesses are either negligible or very situational. His inability to run can be worked around via careful use of his heightened Shift ability, as well as his Morph ability. Also encouraged is the use of aggressive trap placement, however playing it safe and trapping key locations is equally beneficial. His poor grip strength can be negligible in most cases, and completely irrelevant if the grabbed counselor is carrying a pocket knife. Lastly, his poor water speed is very situational and can only really pose an issue if a boat spawns in the map.

Counselors are encouraged to act quickly when faced with this Jason. Kill Jason strategies are somewhat discouraged, as Savini's heightened damage output and longer weapon reach can easily shut down any such idea in only 3-5 attacks. A viable tactic against this Jason is working in small groups and having plenty of high-stun weaponry to keep Savini at bay while performing tasks such as vehicle repair and contacting the police or Tommy. Ultimately, a counselor capable of staying on the move has a far greater chance of surviving an encounter with Savini Jason, as he excels in situations where counselors are at a stand still.

Overall, Savini Jason is a powerful antagonist and one of the better Jasons to use in the game. However, with that said, his playstyle is not the easiest to master. In fact, one could argue that his greatest weakness, is being in limited quantity, creating a niche playerbase as a result.

Unlike the other Jasons - which were modeled after the films they were in - this Jason is not from any of the Friday the 13th movies and was instead created as a different variation of Jason by Tom Savini (hence the name), who created the gory special/make-up effects for the first and fourth installments. Savini Jason was created to reflect what Jason may look like if he had survived the events of Part 9 and returned to Crystal Lake after escaping hell.

Savini Jason's appearance is visualized with the hockey mask blackened with the top red chevron existing, the right side completely damaged much like in Part 7, and has visible claw marks. However, the mask oddly no longer has the axe cut on the mask. He is shown to have been cuffed with a chain that trails around his neck similar to Part 7, and wears the Big-Mac-esque worker shirt with pockets; aside from it being now completely black, the left side is completely torn to show the shoulder, now molten-like with small spikes. Parts of the shirt on the back are also scratched to show the molten appearance, and he leaves a small ash-particle trail behind whenever he walks. Lastly, his pants are now black with some tears at the thigh and the knee pad, and he wears black boots.

Savini Jason's appearance does not seem to include many canon features from previous films. Starting with his head, his skin compared to Part 9 now remains less bloated and rather smoothed. Underneath his mask, his eyes are glowing orange and he has scratches on his face which the insides show to be also glowing orange. The left side skin appears to be a bit stretched, and his mouth - while opened a bit - is shown to be sewed with his skin as the inner mouth glows orange like the scratches and the eyes. The top right side of his eye is decomposed to show the bone around the eyeball. With his body appearing to be very muscular, his skin appears in a color like dark ash, and shows the molten appearance a bit. Finally, he appears to have his fingernails blackened and long, much like in Part 4.

Currently the only weapon he appears to be using is the Devil's Pitchfork (in-game simply called a Pitch Fork). 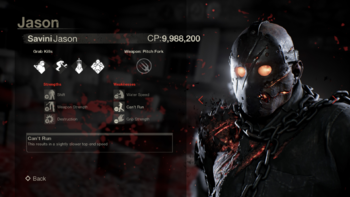 it looks like the jason ax is the same as the mother uses to kill the victim in movie one and it's the same ax the victim uses to try to kill jason.

From Left to Right: