Mitch Floyd is one of the Counselors in Friday the 13th: The Game, and is nicknamed "The Stoner". He can be unlocked at Level 24.

Mitch’s gameplay is centered around not being frightened easily and excelling at repairing objectives. His composure is the second highest in the game, only being beaten by Jenny. Where he shines is his high repair stat. It’s the second highest in the game behind both Eric and Deborah. He also has a decent level of stealth, meaning he can stay hidden from Jason without giving off his location provided if he is a considerable distance away.

While he doesn’t get frightened easily, he’s definitely not a counselor made to fight. He possesses unimpressive strength and abysmally low luck. He’s also lacking in speed and stamina which will make it hard for him to evade falling into Jason’s clutches. Due to his poor combat ability, players should seek out firearms or weapons with a high stun chance. Doing this will help make up for his weaknesses.

Mitch is not a counselor meant for being a “lone-wolf.” His stealth isn’t good enough to allow him to remain hidden, he is awful at fighting, and to top it off, he’s not particularly good at running. It’s best that he sticks with other counselors so that they can protect each other from Jason. Upon selecting Mitch, players should check to see whether or not any of his teammates have selected Jenny. Mitch and Jenny are a great combo when paired together as they both have the same level of stealth, high composure, and similar speed/stamina stats (meaning that they simply just can’t outrun the other and leave them behind). Mitch is the repair specialist of the duo while Jenny can be his bodyguard. If the two players are good at communicating and playing together, Jason will have a difficult time dealing with them. Due to both of them having high composure, they have a decent chance of escaping Jason’s grasp should he foolishly wait too long to execute them.

Mitch doesn’t fare well in the later stages of the game as Jason gains Rage. When this happens, it becomes next to impossible to survive and outrun Jason as him. It’s best for players to fix up an escape with their teammates as quickly as possible. All in all, Mitch has his uses and roles that he fills very well, but he simply isn’t good enough to survive on his own. His best chances of survival is to work together with other counselors in order to fix up an escape. Mitch isn’t very versatile as a character, so players must make wise choices on what to do when in-game.

Outside the Virtual Cabin, he is found sitting at the end of the dock. After Jason is resurrected, Mitch's corpse is found floating in the water next to Vanessa with blood on his back. 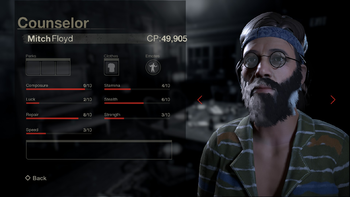 The stats for Mitch Floyd.

Mitch Floyd depicts "The Stoner" trope or "The Hippie" trope. He has long hair and a full beard, and wears a headband. He also wears round glasses similar to that of Deborah's. He is a Caucasian male and wears a V-neck shirt, purple jeans, and red tennis shoes. He is slightly older than the other counselors and is lean, similarly to Chad, but less muscular.