As part of the Unified Community Platform project, your wiki will be migrated to the new platform in the next few weeks. Read more here.

Killing Jason requires teamwork, skill, but mostly luck. It's recommended not to attempt this if a group is disorganized and/or cannot communicate with each other. 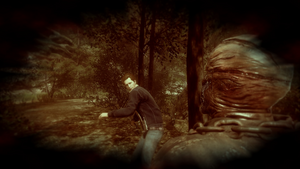 The following items must be acquired before attempting to kill Jason:

Once a team obtains all of the following above, these steps must be met:

If done correctly, a cutscene will play with Tommy hitting Jason once in the side of the face, then in slow-motion in the top of the head; Jason will fall down, this time for good. This leads to all the remaining counselors escaping, ending the round with the survivors being declared the victors.

A sweater belonging to Jason's deceased mother, it can be found only in Jason's shack which spawns in a random area. A good tip to finding the shack is understanding the location of campfires on a map loadout. Jason's shack will replace one of the campfires, so if you have a map (and know the locations of all campfires) you'll have a good idea of where to find the sweater. While equipped, it doesn't take up an item slot compared to normal items, but it can only be used by female counselors.

As mentioned above, Pamela's sweater can "stun" Jason for a momentary time, giving everyone around Jason the opportunity to knock him on his knees while his guard is down, which is necessary for Tommy Jarvis to kill him. However, outside of the Killing Jason quest, it doesn't hold much power. The female counselor cannot move for a short moment when using the sweater, which makes it detrimental as an escape tool, and wearing it will make most Jason players anxious since it means he could be killed if Tommy Jarvis is still alive. Therefore, if you don't want to be singled out as a target, don't wear the sweater.

If you intend on grabbing the sweater, choose a female counselor who is athletic (high speed/stamina) or stealthy (high stealth/composure). Depending on your playstyle, you can either hide from Jason until Tommy Jarvis arrives, or wear the sweater as an athletic counselor as a means to draw aggro from Jason. The former is a great way to make Jason search areas other than objectives while the latter is a great way to draw Jason's attention towards you so fellow counselors can repair objectives. Either way, Jason players who panic will hunt you down if they know Tommy Jarvis hasn't died yet, so be ready for a showdown if Jason finds you wearing his mother's sweater.

An iconic hockey mask Jason is famously known for wearing, this can be knocked off his face if counselors successfully deal enough damage by attacking his face. Counselors with high strength will excel at this part, and Tommy Jarvis (if summoned into the game) can be a major help with his maxed strength stat. They will need to be armed with high strength weapons to make this task easier; look for machetes as well as axes to get this job done.

When a female counselor is equipped with the mask, Pamela will not warn Jason someone has intruded the shack. However, the female counselor should watch out for bear traps Jason might leave behind as a precaution. If you're making the run for the sweater, try to arm yourself with pocket knives and/or medical spray cans to help you deal with the traps, but if you end up having to step on one in order to disarm it, Jason will be warned by a noise cue as well as a glowing icon on his map what you're up to.

As of the patch released on October 25, 2017, Tommy is now automatically equipped with a medical spray as well as a pocket knife, meaning it can sometimes be advantageous to have Tommy help out a female counselor with gaining entrance to Jason's shack should there be a trap lying in wait.

If you know Tommy Jarvis is on the map, or you have time to loot since you had the mask when you successfully entered the shack, consider grabbing the axe. This can be used by Tommy Jarvis to execute Jason if no one can arm him with a machete/axe of their own. It can also be given to strength counselors or Tommy in order to help them rip off Jason's mask if that step hasn't been completed yet.

Killing Jason is the most difficult way to win the game as a counselor, not only because of the many steps involved (which includes fighting Jason), but also because it's very easy to screw up just one of the steps. As a result, coordinated teams are the best way to tackle this win condition.

However, since a random player is chosen as Jason, it's very possible one of said people in the coordinated group could be chosen. When this happens, it's easy for Jason to predict what the others might attempt to do. There are several tips each side can take in order to advance/prevent this from happening:

While playing with a group of friends, you will have to expect the possibility of incompetent teammates outside the group who might ruin the plan unintentionally (or on purpose, in the event a malicious troll catches wind of what's going on). There are ways to make this win condition easier to do, however.

First, plan with your friends on whether or not you plan on doing this to begin with, then choose counselors who excel at fulfilling the steps. Every counselor can contribute to killing Jason, but some of them are better at certain tasks, and it's up to you to figure out where your place will be in the team. Have at least one of your friends choose a female counselor; she can grab the sweater to ensure your team has someone they trust equipped with it.

Don't ignore the other objectives; they can be useful for putting pressure on Jason as well as serving as a backup in case it becomes impossible to kill him. For instance, successfully calling the police will put Jason in a tough spot, and many counselors who refuse to take part in trying to kill Jason will flee. This gives your buddies as well as people willing to cooperate more time to plan while Jason hunts down the fleeing counselors. Furthermore, if you meet all steps, and simply need to find Jason, you can force him to locate your team near the police area. This way, if the plan somehow fails, several players can still escape. Also, due to calling the police, Jason will tend to visit this spot often in order to prevent counselors from escaping, meaning you'll have a good idea of where he'll be from time to time.

Fixing an objective can be done by various people, and Jason will still hunt down people who camp around objectives which can be used to your team's advantage. Set up ambushes near objectives, possibly recruiting other players nearby or using them as bait to draw Jason towards your group. You can get the mask while ambushing Jason instead which is more preferable than being surprised by him.

Keep in mind some people outside your group of friends might not be willing to join your group at first; they will need hard proof Jason can be killed that round. By completing tasks, and successfully knocking Jason's mask off, you might be able to convince naysayers to work for the same cause. This is especially important since a random player who might try to run Tommy as a "second life" could ruin the plan, so having a way to communicate to various people outside the group is important. Some steps can be taken to more easily convince players who are on the fence about joining your group, but others may simply refuse to work with you. In that case, try to have them stay away from your group so they don't end up getting caught in the crossfire when your team fights Jason to unmask him.

Finally, don't be dismayed if your team fails. The game was intentionally made for Jason to be very powerful compared to the counselors; failure will happen often. But this makes it all the more exciting if your team manages to pull this kind of victory off successfully.

In reality, Jason won't have to do many things different even if he knows some of the counselors intend to kill him. But there's still strength in knowledge as well as making preparations.

First, if you know there are people planning on killing you before the round begins, choose the Jason you believe is capable of preventing the counselors from achieving this lofty goal. For instance, Part 2 Jason has a strengthened Morph ability, and has seven traps for dealing with pesky counselors making a run for his mother's sweater, but it can be player preference.

Set one trap in front of the entrance to his shack. This way, a female counselor cannot enter the shack with ease, or they will at least have to use a pocket knife and/or medical spray can to deal with it. Next, continue to hunt down counselors like normal, but watch out near objectives if you notice through noise pings/sense vision there are multiple people in the same spot. There's a good chance it's an ambush in wait, but if you plan on murdering as many counselors as possible, then you will eventually have to fight them.

Running Jason can freely move around to assault counselors who use combat mode; take advantage of their decreased speed. This way you can move quickly to avoid being struck in a blind spot. On the flip side, non-running Jasons should use combat stance to block attacks while retaliating when given the opportunity. Jason has a faster swing animation, and can also grab counselors faster than they can hit you, but only grab if you know the counselors cannot free your victim easily (e.g. the whole group is armed with weapons that have weak stun potential). It's a better idea to hack the counselors life away since this will weaken them to a point where they will be uanble to run from you with ease. Furthermore, once fear starts to take over the whole group they will suffer stamina/stumbling penalties, all of which works in your favor.

Finally, if you can, try to murder Tommy Jarvis or the female counselor wearing the sweater before the two of them can meet. By murdering one of the two, you will end any chance of the counselors killing you, forcing them to find ways to escape instead. In the event they are prepared, and they find you, try to place any traps you have left in front of you before the sweater girl can make her move. There's a chance Tommy might accidentally step on the trap, and if he does while you recover, the counselors will fail to kill you (plus they're all conveniently grouped together).

Above all else, don't intentionally hand them an easy victory if you find out their intentions. It's far more grand if the counselors managed to actually kill Jason despite all odds, and being given a free, cheap win makes the achievement less admirable.