Kenny Riedell is one of the Counselors in Friday the 13th: The Game, and is nicknamed "The Head Counselor".[1] He is one of the five counselors already unlocked in the beginning of the game, the others being Chad Kensington, Jenny Myers, Vanessa Jones, and Sheldon "Shelly" Finkelstein.

He's smart, organized and a natural leader who oozes charisma. He can keep himself composed in even the most dire of situations which makes him someone you want to be around when Jason is nearby.[1]

Kenny is up there with Shelly around the top counselors. He has 5 in every stat which means no weaknesses and all strengths. Tommy Jarvis has 10 in all stats making it so if you have 2 Kenny’s on your team you might as well have an extra Tommy, because Kenny’s powers add up. Kenny is also the only male counselor who can wear the sweater.

In the Virtual Cabin he and Tiffany can be found having sex.

Kenny Riedell wears a red flannel shirt, knee high shorts, and hiking boots. Representing the "Head Counselor" trope, he's the one who other counselors lean on for guidance and/or assistance within the group. Due to his skin color, he appears to possibly be either Latino, Hispanic, Italian, or Mestizo, but there's no confirmation yet on what his actual ethnicity is. He is more muscular than Chad, but less lean, and sports more body hair than his fellow male counselors. 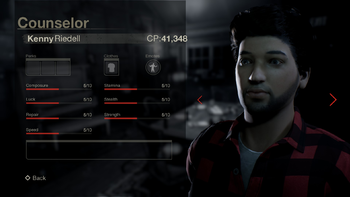 The stats for Kenny Riedell.