Jason (Part 7) is one of the variations of Jason Voorhees featured in the game. This Jason is modeled after his appearance in the movie Friday the 13th Part VII: The New Blood (1988). He is unlocked upon reaching Level 7.

The undead, decomposing Jason Voorhees remains chained to the bottom of Crystal Lake. After some time had passed since the events of the previous movie, a young child named Tina Shepard witnesses her alcoholic father physically abusing her mother; she unlocks previously latent telekinetic powers under stress. This unfortunately results in her father's death, sending his body to the bottom of Crystal Lake.

Ten years later, Tina (now a teenager) is still struggling with the guilt surrounding the death of her father. Tina's mother, Amanda Shepard, takes her to the same lakeside residence they lived in years ago so her powers can be studied by her psychiatrist, Dr. Crews. He begins a series of "experiments" designed to agitate Tina's mental state by verbally assaulting her, forcing her powers to become more pronounced.

After a particularly upsetting session with Dr. Crews, Tina runs from her cabin, and flees to the dock. While thinking about her father, she wishes he would come back to life, triggering her psychic powers. However, her power unintentionally breaks the chain around the neck of Jason Voorhees. Tina's torment from her powers starts to increase as Jason emerges from the lake, and upon seeing Jason she passes out. Realizing his newfound freedom, he resumes his reign of terror upon the area once again, choosing to ignore Tina for the time being. After waking up, Tina tries to warn Dr. Crews about Jason, but he brushes off the warnings much to her dismay. He tells Tina she was hallucinating, and while she doesn't believe him, she manages to calm down for the time being.

Later on, a group of teens next door to the Shephard residence are planning a birthday party for their friend Michael. This group includes Russell (the preppy guy) as well as his girlfriend Sandra; Ben with his girlfriend Kate; Eddie (a science-fiction writer); David (a stoner who was high throughout the movie); perky Robin; shy Maddy; and snobby socialite Melissa, all of whom have mixed reactions to Tina being invited to the party by Michael's cousin Nick. To Melissa's irritation, Nick is seemingly interested in Tina, which results in her bullying Tina during several occasions. Worried about the group's well-being, Tina tells Nick about Jason, and has a vision of Jason murdering Michael.

During these events, MIchael is murdered along with his girlfriend Jane when Jason discovers them driving to Crystal Lake, and later murders another couple in the woods. Tina finds the spike Jason used to murder Michael as well as Jane, and tries to warn Dr. Crews. This falls on deaf ears; Dr. Crews merely tells Tina it was a hallucination. In secrecy, he later hides the spike in order to further agitate Tina's psychic abilities while also trying to make her appear unhinged.

Tina decides to find her mother while Nick chooses to follow her. Her mother, on the flip side, learns that Dr. Crews had hidden the spike Tina found earlier; she realizes he never intended to help Tina. Instead, he wanted to exploit Tina's powers for personal gain, choosing methods to purposely keep her stress levels high knowing Tina's powers became more pronounced under those circumstances. Tina overhears Dr. Crews' intensions, as well as his decision to send Tina back to the mental hospital, and drives off in her mother's car to avoid him. During this time, she has another vision; her own mother dying by Jason's hands, and the vision terrifies Tina long enough to accidentally crash the car. She then immediately runs back to find her mother in order to save her.

During this time, Jason had been murdering the other teens. Russell is murdered with an axe to the face, Sandra is pulled underwater while she is skinny-dipping, Maddy dies from a sickle, Ben's skull was crushed with Jason's bare hands, and he shoves a party horn into Kate's eye. Choosing to move inside the cabin, Jason continues his murder spree: David is stabbed with a kitchen knife, Robin is thrown out of the window, and he decapitates Eddie with a machete.

When Jason attacks Dr. Crews, he saves himself by selfishly using Mrs. Shepard as a shield. As a result, Jason murders her instead with a sling blade. Dr. Crews eventually meets up with Tina again; he warns her not to run off into the woods, which goes unheeded by Tina who is too worried about her mother. Shortly after, Jason hunts Dr. Crews down with a motorized branch trimming saw. Tina finds her mother's body shortly afterwards, and uses her powers to trap Jason using tree roots; electrocute Jason; and pin him down by crashing a cabin porch on him. She escaped to the cabin where the party earlier had begun, and tells Nick as well as Melissa what happened. Unfortunately, Melissa thinks she is crazy, choosing to leave the house instead of sticking with the others. This plan seals her fate; Jason returns, slamming an axe into her face.

Nick tries to fight off Jason but is subdued. In desperation, Tina unleashes her powers in various ways, such as forcing Jason's mask to tighten until it breaks in two which reveals his decaying face. As the battle rages on, the Shepard lakeside cabin is destroyed by an explosive fire, which throws the trio back onto the dock. Although she is unable to kill Jason, she unknowingly summons the spirit of her father from the lake. Bursting through the planks of the dock, he dragged Jason back down into the depths with him, chaining the killer once more.

The next morning, while someone finds Jason's broken mask in the wreckage, Tina and Nick are taken away in an ambulance. The screen starts fading into darkness while Jason's whispers can be heard from far away.

This Jason is an ideal Jason to play for taking down groups of counselors quickly, but keeping a decent amount of mobility at hand. First of all, this Jason has a Sense strength, allowing him to find counselors with his Sense ability at long distances. This can be a great strength to have, as it makes it easier to keep an eye on a counselor or groups of counselors, allowing you to plan your next move. Paired with Stalk, this can help Jason keep a keen eye on counselors and then get a jump on them. It also helps that his Sense lasts quite a long time, allowing you to get even more out of the Stalk and Sense combination.

Thanks to his Weapon Strength boost, he can deal large amounts of damage to counselors, which can make this Jason viable in a duel with a counselor. Instead of the normal six attacks it takes to kill counselors (if they are not equipped with any Thick Skinned perks or have prior damage taken), it takes about 3-4 to kill a counselor, which can help him end duels much faster and injure counselors, granting you the opportunity to go in for a grab kill and end the counselor.

With a quick swimming speed, he can also catch any counselors who happen to be swimming in water or catch a moving boat, and then drown the counselors in the boat. This can also be a great way to get around maps where water connects the map together, like the Jarvis House, Pinehurst, or Higgins Haven, small and normal. This strength still is only good in some situations, as on most maps, there is no boat, and water serves as a boundary on some maps, like Packanack and Crystal Lake. Therefore, this strength is only good in a handful of situations.

To efficiently utilize the Weapon Strength boost in choice of weapons, arm this Jason with a spear or devil’s pitchfork, as he will have an extended reach, making him even more lethal. In terms of a large group, use the pig splitter, as it has a rather large radius of attack.

While this Jason is great for annihilating counselors in groups and effectively tracking them, he ultimately will have troubles if they try to repair objectives. Armed with only three traps, you will have to use them strategically, but counselors will be able to bypass them with pocket knives. If a large group of counselors try to repair an objective, it can be difficult to control them if they successfully hit Jason, as Part 7 Jason has a lower stun resistance, buying the counselors more time should they stun you. This can make it difficult to deal with large groups, but Jason possesses the ability to block attacks (which should be used in case a specific group proves too difficult to deal with).

The broken part of the chain Tommy Jarvis used several years ago to pin Jason to a boulder at the bottom of the lake (during the events of Friday the 13th Part 6: Jason LIves) is still wrapped around his neck. His shirt and pants, now extensively torn, exposed a lot of his body underneath.

His hockey mask is very worn and discolored, with the axe mark from Friday the 13th Part 3 still present. There is also a large chuck of the hockey mask broken off on the bottom left side, partially exposing that side of his mouth (this was caused by Megan Garris in the climax of Friday the 13th Part 6: Jason Lives when she used an activated boat's motor propeller to free herself from Jason's grasp in the water).

Unmasked, his flesh and skin are now putridly rotten; it has reached the point where his spinal cord and many of his bones (including his ribs, sternum, etc.) are now visible. Jason's face is rotted with a dark brown color to it. His nose cavity is also exposed, showcasing several scars from injuries inflicted on his face in previous movies. 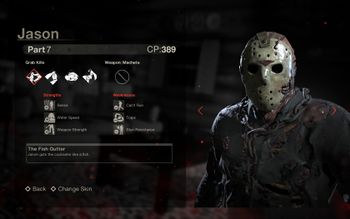 The stats for Part 7 Jason.