The night after the events at Higgins Haven, Jason Voorhees's body is found and delivered to the morgue. After reviving from his wounds and escaping from the cold storage, Jason kills coroner Axel with a hacksaw, and then stabs nurse Robbie Morgan with a scalpel. The next day, a group of teenagers drive to Crystal Lake for the weekend. The group consists of Paul, his girlfriend Sam, her virgin friend Sarah, pretty-boy Doug, socially awkward Jimmy, and jokester Ted. On the way, the group comes across Pamela Voorhees's tombstone and a female hitchhiker, who is soon killed by Jason.

The teens arrive and meet neighbors Trish Jarvis, her twelve-year-old brother Tommy, their mother, and the family dog Gordon. While going for a walk the next day, the teens meet twin sisters Tina and Terri, and go skinny dipping with them. Trish and Tommy happen upon the scene, and Trish is invited to a party to take place that night. Afterwards, when their car breaks down, Trish and Tommy are helped out by a young man named Rob. They take him to their house, where Tommy shows Rob several monster masks he made himself before Rob leaves to go camping.

Later that night, as the teens begin the party, Sam goes out to the lake, where Jason impales her from under a raft. When Paul goes out to be with her, he is harpooned in the groin. Terri tries to leave the party early and has a spear rammed in her back. Jimmy intends to celebrate sleeping with Tina with a bottle of wine, but Jason slams the corkscrew on his hand and hacks him in the face with a meat cleaver. Tina looks out a window upstairs and is grabbed and thrown to her death, crashing on the car. While a stoned Ted watches vintage stag films with a film projector, he gets too close to the projector screen and is stabbed in the head from the other side. After Doug and Sara finish making love in the shower, Jason attacks Doug, crushing his head against the shower tile. He then kills Sara by driving an double-bit axe through the front door when she tries to escape.

Trish and Tommy return from town and discover the power outage. While looking for their mother, who had been killed by Jason earlier without her knowledge, Trish comes across Rob's campsite and learns that he is actually the older brother of Jason victim Sandra. Rob further explains to her that Jason is still alive and he came to Crystal Lake to get revenge for Sandra's murder. Worried for Tommy's safety, they return to the house. They then go next door to investigate and discover the teens bodies. Gordon flees and Rob is soon caught and killed by Jason in the basement as Trish runs home. She and Tommy barricade the house, but Jason breaks in and chases them into Tommy's room. Trish lures Jason out of the house and escapes, then returns home and is devastated to learn that Tommy is still there. She senses Jason behind her and tries to fight him off with a machete but is overpowered. Tommy, having disguised himself to look like Jason as a child, distracts him long enough for Trish to hit him with the machete, but she merely whacks off his mask. As Trish stands horrified at Jason's deformed face, Tommy takes the machete and slams it in the side of the killer's skull and he collapses to the floor, splitting his head upon impact. When Tommy notices that Jason's fingers are moving, he continues to hack at his body screaming, "Die! Die!"

At the hospital, Trish is visited by Tommy. He rushes in, embraces her, and gives a disturbed look while staring ahead.

Part 4 Jason is considered to be the most vicious of the group when it comes to combat. His ability to run while armed with high damaging attacks (thanks to his Weapon Strength buff) makes him a dangerous combatant, and when combined with the Destruction strength he can break into cabins with ease. Due to having no weaknesses involving defense or HP, he's also tough to take down, making him a poor choice for a Kill Jason comp to target in a match. Simply put, this Jason was made to annihilate counselors, and is perhaps the best pick in the game for dealing with groups of counselors who try to gang up on him.

On the flip side, he's also the worst pick for objective control. His Shift- weakness makes him unable to catch a car, he cannot catch a moving boat in the water, and his low amount of traps makes it difficult to lock down an objective for long. It's for this reason that he must track down the counselors quickly in order to prevent them from making any strides in getting an objective running. With an average Morph he can keep a reasonable eye on the major objectives, but he will oftentimes have to go hunting when the counselors start to wise up.

His first victims should be the slower, less athletic repair counselors (e.g. Deborah). Utilize his strengths to grind down weaker counselors, then start hunting down the speed demons who will try to steer clear from you if the team's ability to repair objectives is weakened.

Stalk, once unlocked, can be a real life saver for this Jason. He doesn't possess a weakness for this ability, so he can use it often to sneak up on an unsuspecting counselor. If caught, Jason can brutalize his victim quickly before they can react. It's for this reason that Stalk should be used before you use Morph as well as Shift.

Overall this Jason can be difficult to master, especially against skilled counselors, but if you're looking for a simple choice to rip counselors apart, this Jason can fit that role very well.

In comparison to Part III, this Jason has not necessarily changed much outside of the facial appearance, and some slight changes with the mask and clothing. Following the events of Part III, he still mostly contains the characteristics of Part 3 Jason being more muscular and with greater strength than he had before in Part 2. However, unlike Part 2 and III, his personality in the film has now changed to being much more rageful, brutal, and fearful than he had been in the previous films. As with this, most of his victims he had killed were much more bloody and gruesome than he had been like with his previous victims. Although still presently being able to receive pain and damage, he had gained a higher tolerance of damage and can slightly recover faster from attacks than the usual. Discounting when Trish smashes Tommy's television set over his head which kept him down for a couple of minutes, this is shown when she slashes the side of his hand with Rob's machete when he grabs her in the basement, gets the clawed end of a hammer slammed into the side of his neck to free Tommy out of his grasp, having to get his hand split open with the machete, and getting slashed from across the chest to no effect other for him to continue attacking her in a more furious manner. As well as this, he was the fastest of the human Jasons, by being able to sprint very fast after Trish around the property throughout the climax.

As seen in the film and in-game, Jason still contains the appearance of him in Part 3, with some slight changes. As there are two versions of the now more-weathered hockey mask seen in the film, both of which contain the infamous bloody axe cut from Chris' attack with the axe in Part III (the only continuity that was kept in later sequels) and the top chevron worn-off to only half of it remaining on the mask. The first version of the mask seen early to mid in the film contained the lower chevrons only the left chevron's bottom was worn off and on-top of the axe cut had less blood. The other version of the mask, seen in the climax and chosen in-game, contains the lower chevrons worn off of the mask completely, having more blood on the axe cut, and was a bit wider around Jason's head. Still wearing the green Big Mac worker shirt with the two chest pockets, the shirt now appears in a darker shade of green and is buttoned up to where the white undershirt is not seen. His belted pair of grey cargo work pants now are dirtier and show the bloody stab wound from one of the other attacks by Chris. Lastly, he still wears the same black boots as before which they have little-to-no new changes on them.

When unmasked, Jason's facial appearance has now changed once again, but this time the design remains more faithful to his original younger design design in the first film. By this, his left eye is now tilted towards the left corner while his pupil faces upwards, his head size is now much more bigger than before, and his overall face more like his younger self. However, he is now seen with is left ear pulled out a bit more while the right ear appears visibly normal, and his lower jaw filled with his teeth distorted and out of place protrude to the left side of his mouth. From the events of Higgins Haven in III, his bloody axe wound in his head has bled to the side and back of his head via the positioning of his head laying on the ground, the right side of his face appears to be rather wrinkled from his head position, and has a slightly paler tone in his skin color. A new addition to the game now has his eyes all blood-shot from the head trauma wound of the axe. 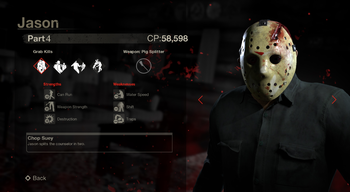