Fox is one of the Counselors in Friday the 13th: The Game, and is nicknamed "The Biker Chick". She can be unlocked at Level 32.

Following in the footsteps of counselors like Adam, Kenny, and Shelly, Fox is a counselor who is good at many things, yet master of nothing in particular. What makes her stand out is being the only female counselor with above average strength, making her a star choice for teams planning on killing Jason.

Most female counselors are ill-equipped for ripping Jason's mask off, but Fox isn't one of them. She also takes a considerable amount of time to panic when squaring off against Jason due to her composure, and were it not for her low luck she could be one of the best fighters in the game. However, having low luck does mean she will stumble often when she does reach high levels of fear, something which can put her in a bad spot while trying to hit Jason with a weapon, but this is based on chance.

Fox's atheleticism, while not great, is decent enough to handle Jason when running from him, although her low stealth does make it easy for him to track her down. You will have to expect his company since he will not let you run around as you please, especially since her above average repair makes her a capable fixer.

When picking Fox, it's best to work with a team rather than act alone. She doesn't have the stealth/athleticism to handle staying away from Jason when alone, and she synchronizes well with other "jack of all trades, master of none" counselors. Work with a group, then communicate who will watch each other's backs while one person attempts repairs.

If need be, Fox can wear the sweater when trying to kill Jason, and thanks to her high strength she could even be the one to rip the mask off. But since she cannot outrun him from long as well as stay hidden while on the move, it's difficult for her to be the designated sweater user. Instead, she can be considered a backup pick for that purpose, and let another faster/stealthier female counselor take the sweater.

For weapons, Fox can consider a multitude of choices. Pick weapons with high damage if you're trying to rip Jason's mask off, or go for high stun/durability choices like the wrench when you need general self defense. Firearms should be given to counselors who have low fighting potential, but they can also be used by her when in a pinch.

Like in the movies, Fox is no stranger when it comes to working with a group of like-minded people. Just make sure the group is on the same page, or else you might join her same fate.

Outside the Virtual Cabin, she is found standing by a tent staring towards A.J. as well as Adam. After Jason is resurrected, Fox's corpse is found pinned to a nearby tree with a pitchfork through the neck.

Her appearance is directly based on the late Gloria Charles' character from Friday the 13th: Part III. That being said, she does have a few alterations compared to the movie. First, the fox tail hanging off her hip is missing in-game, and she isn't wearing high-heels in-game either. She is also missing the bracelet on her left forearm. But otherwise the majority of her apperance in-game is very similar to her movie counterpart. 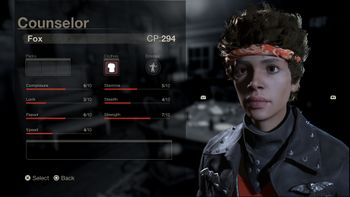 The stats for Fox.