Deborah Kim is one of the Counselors in Friday the 13th: The Game, and she is nicknamed "The Bookish Girl".[1] She can be unlocked at Level 6.

Studious, she's very intelligent and uses her tiny stature and light steps to sneak around, staying out of view from Jason.[1]

Being one of two counselors with maxed repair, Deborah's specialty makes her an invaluable asset for the team by getting objectives up-and-running again. However, this also makes her a high priority target for Jason, and while her high stealth can help prevent Jason from finding her while jogging, he can see her noise pings if he's nearby (roughly when Deborah is able to hear Jason's theme music). As a result, Deborah has to keep a safe distance from the masked murderer, or else be discovered as well as annihilated on the spot.

LIke many high repair/stealth counselors she isn't very athletic, and she has awful strength intertwined with below average luck, making her ineffective at fighting Jason off by herself, thankfully there are several perks that help her get around her weaknesses such as Sucker Punch, Marathon, and Man At Arms. Furthermore, while her composure isn't bad, it's also not the greatest; she will suffer the stumble/stamina regeneration penalties more often than not if she doesn't keep her fear in check. But keeping in mind objectives are always under close watch by experienced Jason players, all it takes is one routine Morph to find her through sheer luck while she was attempting repairs, or she happened to be near the area.

Deborah is, at heart, a team-oriented counselor; she should consider finding help from another counselor who can act as her bodyguard. With enough time, and Jason's attention focused elsewhere, she shouldn't have problems fixing an objective. But If a worst case scenario forces her to flee, she can consider one of two possibilities: stick with a teammate who isn't too exhausted to fight Jason, or flee to a new hiding place.

She can fix objectives on her own, but her stealth won't help her in later stages of the game due to Jason's Rage ability; it's better to escape using an objective before then. Either way, avoid Jason at all costs when traveling by yourself, and remember to use hiding spots if you need to stay hidden as well as top your stamina bar off.

Firearms should be Deborah's main choice of weaponry. Otherwise, use weapons with high stun potential as well as durability; Deborah won't cause any serious damage with her strength level, and her low luck makes fragile weapons difficult to rely on.

Work with your team to fix a means of escape, all the while remaining vigilant. Jason is only a click away from ruining a well thought-out plan; make sure you have a backup ready just in case.

In the Virtual Cabin, she can be found standing in the kitchen. After Jason breaks out of his display case, Deborah's corpse is found leaning on the stove with a kitchen knife pinning her hand to the counter.

Deborah Kim has clear markings of Asian ancestry, although it remains unknown exactly what her ethnicity is. She has blue-gray eyes and red lipstick. She wears a frumpy sweater; tight jeans; blue flats; and rounded glasses, giving her the appearance of a stereotypical bookworm.

Her Spring Break '84 clothing pack is an open back one piece swimsuit.

Her Halloween clothing pack is a cute bunny costume.

(Note: both are only unlocked from purchasing Downloadable Content.) 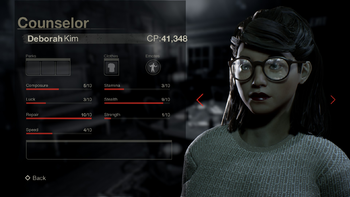 The stats for Deborah Kim.