Chad Kensington is one of the Counselors in Friday the 13th: The Game, and is nicknamed "The Preppy Guy".[1] He is one of the five counselors already unlocked in the beginning of the game, the others being Jenny Myers, Kenny Riedell, Vanessa Jones, and Sheldon "Shelly" Finkelstein.

Many counselors in the game represent a slasher movie trope of some sort, but most of them fit well in a determined role on their team. Chad, however, is a different story. His stats are more finely tuned for representing his trope rather than fit a role, and in this case it's seizing opportunities whenever possible. He can work with a team, but his idea of teamwork is oftentimes warped.

Chad is a kakker due to his abysmal repair stat, and while his speed would suggest being a part runner, he sports glaring weaknesses in both composure and stamina. Simply put, he has too many conflicting issues to act as the team's part runner safely. Instead, Chad's defining trait is his luck, but since this stat isn't well understood by players starting off, it can be difficult to understand exactly what niche he fills.

First off, Chad possesses an interesting trump card most inexperienced players will be unaware of. Since luck increases a weapon's durability, a maxed luck stat means the baseball bat in particular becomes a powerhouse weapon which can last several swings, even with its naturally low durability (so long as you attack Jason outside of stun invincibility frame rates), giving Chad the ability to fight Jason off surprisingly well for someone who panics quickly. Taking into account all the extra bonuses given by the luck stat, it becomes obvious Chad is a natural escape artist, and he can duel Jason in order to buy himself more time.

Finally, despite his below average stamina, his speedy nature gives him great sprinting potential in bursts, allowing him to make a quick escape when the going gets tough. However, if you aren't careful you can run out of stamina quickly, so jogging is the preferred way to keep away from Jason (unless you absolutely need the extra speed, such as avoiding a Shift-Grab attempt for instance).

How all this relates to his teamwork depends on whether or not you intend to distract Jason. Chad is fast, he can kite Jason fairly well, and Jason will have problems dealing with someone who can repeatedly stun him. Therefore you can consider using him as a bodyguard to protect the team, then make a grand escape while Jason recooperates. But in reality, Chad is an opportunist. There are some cases where Chad can't save someone, and when this happens it's sometimes better to cut your losses by running away. It's not a glorious thing to do, but trying to help a doomed teammate could very well cost your life, and it wastes Chad's potential as an escape artist.

Ultimately, Chad is frightened easily, which makes him unable to face off against Jason in prolonged encounters before his fear gets the best of him. But he also regains his bravery faster if he manages to find a new hiding spot, making it difficult for Jason to hunt Chad down once more with his Sense ability if too much time has passed. Once the coast is clear, look for teammates again to find your next means of survival.

In the end, teammates will have to expect Chad isn't a true team player. He can fight well, so long as he wields a good stun weapon like the baseball bat, but he also panics quickly. And while he favors working with a team, it's mainly because he will be looking to seize an opportunity when it shows up. He doesn't possess enough composure to be around Jason for long without cowering in fear, so whatever you do make sure it involves a quick getaway.

As for weapons, arm Chad with the baseball bat; it's one of the main reasons why you play him to begin with. Firearms can work as well, but the baseball bat should be a priority.

Friends can be nice, but they can also get you murdered. Cowards might be looked down upon... but sometimes, cowards live. The same can't always be said about the hero.

In the Virtual Cabin, he and Buggzy can be found on the second floor overlooking the living room. After Jason breaks out of his display case, Chad's corpse is found at the top of the stairs with an arm severed.

Chad Kensington has short, wavy blond hair, has blue eyes, and is lean and slightly muscular. His default outfit consists of a blue button shirt with a red sweater tied around his shoulders like a cape, yellowish-tan khaki pants with a brown belt, and brown shoes. Chad is also one of the ten counselors who has extra clothing as Downloadable Content.

In the Spring Break '84 clothing pack, Chad wears nothing but a speedo, which can be customized to simply be blue, red, or a cheetah pattern.

In the Halloween Costume clothing pack, Chad is wearing a karate outfit.

Had the lawsuit not taken place, a leaked pajama clothing pack shows that Chad would have worn a bath robe. 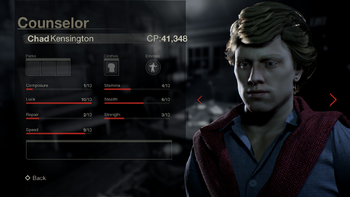 The stats for Chad Kensington.